Leave a comment Posted by Reserve Result. on September 20, 2007

Filmmaker Wes Anderson talks about his new film, The Darjeeling Limited, in the new issue of Men’s Vogue.

Synopsis: Three American brothers who have not spoken to each other in a year set off on a train voyage across India with a plan to find themselves and bond with each other–to become brothers again like they used to be. Their “spiritual quest,” however, veers rapidly off-course (due to events involving over-the-counter pain killers, Indian cough syrup, and pepper spray), and they eventually find themselves stranded alone in the middle of the desert with eleven suitcases, a printer, and a laminating machine. At this moment, a new, unplanned journey suddenly begins. 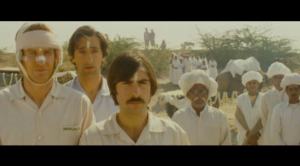