In the SVU episode titled Authority, Robin Williams plays an engineer whose life has gone terribly wrong and who faces serious repercussions. The episode is SVU’s 200th episode and is scheduled to air Tuesday, April 29 on NBC. 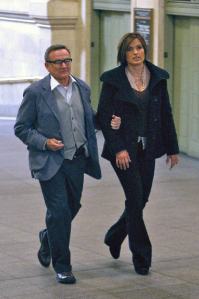 Executive Producer Neal Baer on Robin Williams: “We are thrilled that one of the most talented and versatile actors around will be starring in this powerful and complex special 200th episode,” executive producer Neal Baer said. “We can’t imagine anyone else doing this role.”

Madonna’s excerpts from her Vanity Fair interview and London’s The Times‘ James Christopher review of her feature film, Filth and Wisdom –

On the birth of her daughter Lourdes putting Madonna on the road that ended in Malawi: If you have children, you know you’re responsible for somebody, she explained. You realize you are being imitated; your belief systems and priorities have a direct influence on these children, who are like flowers in a garden. So you start to second-guess everything you value, and the suffering of other children becomes much more intolerable.

James Christopher of London’s The Times positive review of Filth and Wisdom: Her film has an artistic ambition that has simply bypassed her husband, the film director Guy Ritchie. She captures that wonderfully accidental nature of luck when people’s lives intersect for a whole swathe of unlikely but cherishable reasons. Altmanesque would be stretching the compliment too far, but Filth and Wisdom shows Madonna has real potential as a director. 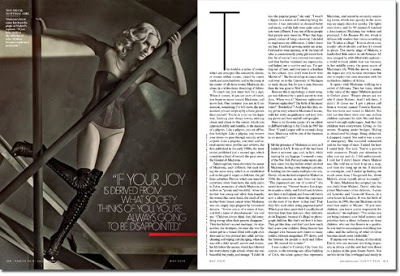 A narration excerpt from Madonna’s I Am Because We Are – 90 minutes Malawi documentary: People always ask me why I chose Malawi. And I tell them, I didn’t. It chose me. I got a phone call from a woman named Victoria Keelan. She was born and raised in Malawi. She told me that there were over one million children orphaned by aids. She said there weren’t enough orphanages. And that the children were everywhere. Living on the streets. Sleeping under bridges. Hiding in abandoned buildings. Being abducted, kidnapped, raped. She said it was a state of emergency. She sounded exhausted and on the verge of tears. I asked her how I could help. She said, You’re a person with resources. People pay attention to what you say and do. I felt embarrassed. I told her I didn’t know where Malawi was. She told me to look it up on a map, and then she hung up on me. I decided to investigate, and I ended up finding out much more than I bargained for, about Malawi, about myself, about humanity.

Madonna’s Hard Candy will be available on Tuesday April 29, and you can pre-order it now on ITunes.

Synopsis: The story of Mike Terry, a Jiu-jitsu master who has avoided the prize fighting circuit, choosing to instead pursue a life of honor and education by operating a self-defense studio in Los Angeles. Terry’s life is dramatically changed however when he is conned by a cabal of movie stars and promoters. In order to pay off his debts and regain his honor Terry must step into the ring for the first time in his life.

Logline: An American samurai film set in the L.A. fight world about a Jiu-Jitsu master who turned his back on prizefighting to operate a self-defense studio, but is conned by a cabal of celebs and fight promoters to enter the ring in order to regain his honor.

Director Gregor Jordan’s The Informers was Brad Renfro’s last film, and they completed principal photography in December of 2007.

Synopsis: A week in Los Angeles in 1983, featuring movie executives, rock stars, a vampire and other morally challenged characters in adventures laced with sex, drugs and violence.

Andy and Larry Wachowski’s Speed Racer gets an exclusive coverage from Entertainment Weekly, and you can read the article on EW. 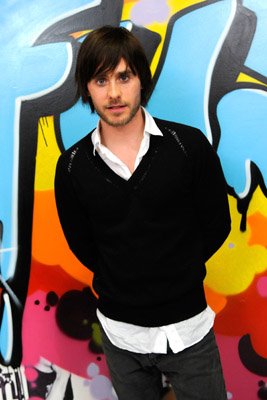 Director Quentin Tarantino and Fergie celebrate their birthday at Jet Nightclub at The Mirage Hotel and Casino in Las Vegas, Nevada, and participated in a cake fight.

The Big Bang Theory and The Big Change’s Sara Gilbert driving her Prius whip on La Cinega Boulevard and Holloway.

Anne Hathaway and Kate Hudson shoot director Gary Winick’s Bride War on location in New York City. Bride War is story of two best friends engage in bridal warfare when their weddings end up on the same day and neither one will budge. 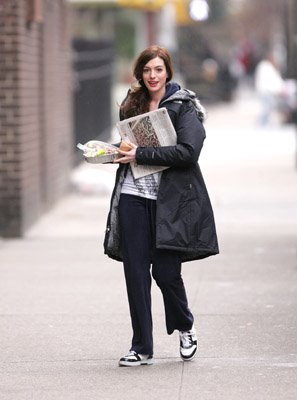 Madonna graces the cover and pages of Vanity Fair May 2008 Green Issue, and professes her love for Britney Spears Blackout disc during her Z100 interview.

Madonna’s Hard Candy will be available on Tuesday April 29, and you can pre-order it now on ITunes.