Christian Bales begins his Batman – Dark Knight promotion and he graces the cover and pages of Details to sell his new film. 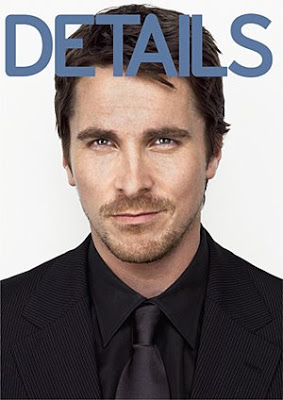 On working with his Dark Knight co-star – Oscar-nominee Heath Ledger: He was incredibly intense in his performance but incredibly mellow and laid-back. Certainly there was this great anarchistic streak to it — just getting dirtier than anybody’s envisioned the Joker before. … Naturally, (the movie) was something I wanted to share with him — and expected to do so. And I can’t do anything else but hope that it will be an absolutely appropriate celebration of his work.

When was the last time you were mistaken for someone else: Yesterday afternoon I was sitting somewhere and somebody started chatting. They said they were an agent, and they asked what I do, and I said, “I’m an actor.” And they said, “Oh, how’s that going for you?” I said, “I think it’s all right.” And they said, do I have an agent?
“Yes, I have an agent.”
“Well, if you ever need any help getting work, give me a call.”
So I said, “Thanks very much.” I think the best one ever was when a casting director saw me in a hotel lobby and practically ran at me, holding a script: “Thank god I’ve finally found you! We have this movie that you’re perfect for, and this is an amazing coincidence. The director and producer are not going to believe it, that I just bumped into you! We’ve been talking about how perfect you are for this role for so long! Finally, I met Christian Slater.”
“Christian Bale.”
“Excuse me?”
“I said, ‘Christian Bale.'”
And she went, “Oh, I’m sorry,” took the script, and walked away.

You can watch Bale and Ledger’s performances in The Dark Knight, when it hits theaters on Friday, July 18th of 2008.