MGM studios / United Artists have released the first look of director Bryan Singer and actor Tom Cruise’s Valkyrie one sheet (poster) that’ll be going up in theaters next week. 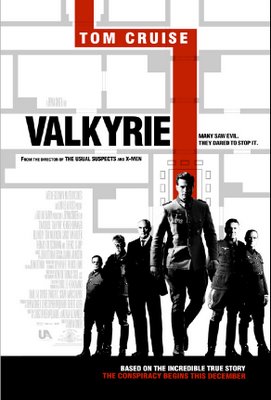 You can download a high resolution version of the image here, and Valkyrie hits theaters on Friday, December 26.

Synposis: The July 20th Plot on Hitler’s life is one of the most heroic, but least known episodes of World War II history. Severely wounded in combat, Colonel Claus von Stauffenberg returns from Africa to join the German Resistance, and help create Operation Valkyrie, the complex plan that will allow a shadow government to replace Hitler’s once he is dead. But fate and circumstance conspire to thrust Stauffenberg from one of many in the plot to a double-edged central role. Not only must he lead the coup and seize control of his nation’s government–he must kill Hitler himself.