Leave a comment Posted by Reserve Result. on November 14, 2008 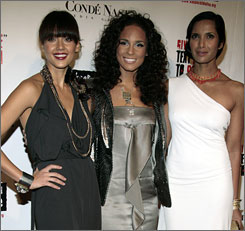 Alicia Keys on recruiting star-studded guests: I bat my eyes and I wink. And we have great conversation, and they show up. It’s a very important event.

Ms. Keys on the country’s direction: It’s a difficult time for all of us, but due to our recent election, it’s a hopeful time.

John Mayer on Keys: She’s a rare human being. I’m proud to consider her a friend. I’m kind of a creep. It’s about supporting a friend, and it’s about myself feeling strong enough about it to help.

Jessica Alba on Keys: What she’s done with this organization, the money and awareness she’s raised, is incredible. Becoming a mom makes everything more relevant. You feel the impact of every decision that’s made.

Padma Lakshmi on helping Alicia Keys raise money for Keep a Child Alive: (It can be tough asking for charity dollars). It really is. I’m sending e-mails and calling. You felt almost bad because it was when the world was crumbling.

To learn more about this children charity, please visit keepachildalive.org.

Excerpt from Queen Latifah speech: I’m so blessed. I was raised by a strong black woman. (She) taught me that every woman was a queen. I want to continue to contribute to this organization. You didn’t need to honor me tonight — I’d still give to your organization. As a person, as a child, I was actually abused and I didn’t say anything, because I didn’t know how.