Oscar winning and 1x nominee actor Heath Ledger graces the cover and pages of Vanity Fair August issue in their posthumous coverage of his supposedly “final days”. The issue hits newsstands in New York and Los Angeles on Wednesday, July 1 and nationally Tuesday, July 7. Here are excerpts from the article: 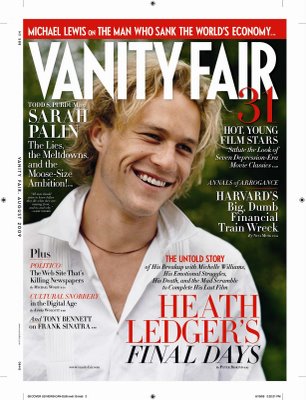 How Ledger cleaned up: Cinematographer Nicola Pecorini, who worked with Ledger on his last film, The Imaginarium of Doctor Parnassus, says Ledger used to smoke marijuana on a regular basis, like probably 50 percent of Americans. But after it became an issue, Ledger went clean as a whistle. And vocal coach Gerry Grennell, who worked and lived with the actor during the filming of The Dark Knight, says Ledger even stopped drinking: Heath would happily go to the bar, buy a round of drinks for friends, and come back and have a soda or juice, never once drinking alcohol.

How chronic insomnia may have led to his death: Ledger’s use of sleeping medication to combat chronic insomnia at the end of his life was of more concern to Grennell. I’d say, ‘If you can possibly bear it to stop taking the medications, do, because they don’t seem to be doing you any good.’ He agreed. It is very difficult for me to imagine how close he came to not taking them.

Ledger would typically spend night after night awake, diverting himself with time killers, Biskind reports, such as re-arranging the furniture in whatever space he happened to be living in at the moment. Grennell coached him in the Alexander Technique, which helped him to sleep for a few hours at a time, but he still struggled.

Everyone has a different view of how he passed away, Grennell tells Biskind. From my perspective, and knowing him as well as I did, and being around him as much as I was, it was a combination of exhaustion, sleeping medication … and perhaps the aftereffects of the flu. I guess his body just stopped breathing.

You can see additional pix and read the full article @ vanityfair.com. var addthis_pub=”reserveresult”;

It’s been said that the most valuable skill to master is self awareness. With Wilco‘s 7th LP – Wilco (The Album) – we take a ride on the heterogeneous melodies from the eclectic Chicago based group, as they continue to explore the vast depths of what makes their music stand out from the leagues of musicians working in the industry today. Jeff Tweedy proves again to be a song writing maven, and here, Wilco provides another album chalk full of substantial chill tunes. Check it out.

Wilco (The Album) track listing are as follow: Wilco [the song], Deeper Down, One Wing, Bull Black Nova, You & I, You Never Know, Country Disappeared, Solitaire, I’ll Fight, Sonny Feeling and Everlasting Everything, and the album will be released on Tuesday, June 30.

Chad Shore is a Contributing Writer @ Reserve Result (RR) and currently working on his feature film screenplays. And you can reach him @ Chad@ReserveResult.com. var addthis_pub=”reserveresult”;

Although it has been confirmed that Phish will be holding a three day festival, the question thousands of people are wondering is where? The October 30th – November 1st dates will be a musical, eye opening adventure for newbies, and hopefully another historic Halloween performance for Phish aficionados.

Most fans are privy to the band’s 1994 Halloween performance of The Beatles’ White Album, The Who’s Quadrophenia in 1995, Talking Heads’ Remain In Light in 1996, and Loaded by The Velvet Underground in 1998. The festival, rumored to be in Indio, California, will force a migration of unwavering masses, as this will cap an epic comeback tour and the release of Joy, the band’s first studio album in five years.

Phish is currently working on their 14th studio album – Joy – which is slated for release on Tuesday, July 28.

Chad Shore is a writer @ Reserve Result (RR) and currently working on his screenplays. And you can stalk him @ Chad@ReserveResult.com. var addthis_pub=”reserveresult”;

Thanks, Arthur Pitt – Director of Public Relations @ Rostrum Records for hitting me up, and keep it coming. var addthis_pub=”reserveresult”;

The french filmmaker Thierry Guetta aka artist Mr. Brainwash [MBW] pays tribute to innovator Michael Jackson, painting a remembrance mural in black white – Michael Jackson: You Rocked Our World – outside his La Brea studio wall in Los Angeles. Everyone is feeling the loss of MJ.

Here’s Joseph Jackson & Family statement — In one of the darkest moments of our lives we find it hard to find the words appropriate to this sudden tragedy we all had to encounter. Our beloved son, brother and father of three children has gone so unexpectedly, in such a tragic way and much too soon. It leaves us, his family, speechless and devastated to a point, where communication with the outside world seems almost impossible at times.

We miss Michael endlessly, our pain cannot be described in words. But Michael would not want us to give up now. So we want to thank all of his faithful supporters and loyal fans worldwide, you – who Michael loved so much. Please do not despair, because Michael will continue to live on in each and every one of you. Continue to spread his message, because that is what he would want you to do. Carry on, so his legacy will live forever.

In addition, Joseph Jackson — My grandchildren are deeply moved by all the love and support you have shown for them and their father, Michael Jackson.var addthis_pub=”reserveresult”;

Michael Jackson graces the cover and pages of Time commemorative issue, which the publication hasn’t done since 9/11’s special issue. The MJ issue includes interviews and thoughts from the likes of Stevie Wonder, Whitney Houston, Tina Turner and Nancy Reagan.

The Time commemorative issue hits newsstands on Monday, June 29. I miss you [Michael] but your legacy shall live on. And here are some more remembrances –

Bette Midler: I loved Michael Jackson from the first moment laid eyes on him as a young performer and over all the years of his career. I never wavered for a moment in my belief in his talent and creativity. He was head and shoulders above every performer of his generation. I personally intend to only remember the best of him, his kindness, his charm, his superb musicianship, his magical dancing and his beautiful voice. He was a showman without equal. May he finally rest in peace.

Mariah Carey: I am heart broken. My prayers go out to the Jackson family, and my heart goes out to his children. Let us remember him for his unparalleled contribution to the world of music, his generosity of spirit in his quest to heal the world, and the joy he brought to his millions of devoted fans throughout the world. I feel blessed to have performed with him several times and to call him my friend. No artist will ever take his place. His star will shine forever.

Elizabeth Taylor: My heart…my mind… are broken. I loved Michael with all my soul and I can’t imagine life without him. We had so much in common and we had such loving fun together. I was packing up my clothes to go to London for his opening when I heard the news. I still can’t believe it. I don’t want to believe it. It can’t be so. He will live in my heart forever but it’s not enough. My life feels so empty. I don’t think anyone knew how much we loved each other. The purest most giving love I’ve ever known. Oh God! I’m going to miss him. I can’t yet imagine life with out him. But I guess with God’s help… I’ll learn. I keep looking at the photo he gave me of himself, which says, ‘To my true love Elizabeth, I love you forever.’ And, I will love HIM forever.var addthis_pub=”reserveresult”;

I’m still so sad on the untimely deaths of Farrah Fawcett and Michael Jackson. Anyways, here’s the new trailer – Amelia – about the life and story of the relationship between famed aviatrix Amelia Earhart [Hilary Swank] and her husband George Putnam [Richard Gere] – directed by one of my favorite auteur – Mira Nira. 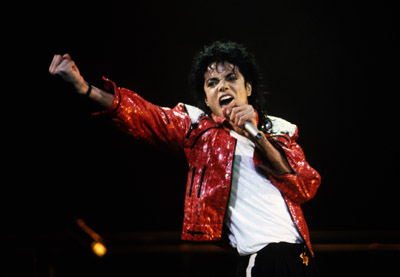 Quincy Jones: I am absolutely devastated at this tragic and unexpected news. For Michael to be taken away from us so suddenly at such a young age, I just don’t have the words. Divinity brought our souls together on The Wiz and allowed us to do what we were able to throughout the 80’s. To this day, the music we created together on Off The Wall, Thriller and Bad is played in every corner of the world and the reason for that is because he had it all…talent, grace, professionalism and dedication. He was the consummate entertainer and his contributions and legacy will be felt upon the world forever. I’ve lost my little brother today, and part of my soul has gone with him.

Madonna: I can’t stop crying over the sad news. … I have always admired Michael Jackson. … The world has lost one of the greats, but his music will live on forever! … My heart goes out to his 3 children and other members of his family. … God bless.

Lisa Marie Presley: I am so very sad and confused with every emotion possible. I am heartbroken for his children, who I know were everything to him, and for his family. This is such a massive loss on so many levels, words fail me.

Brooke Shields: My heart is overcome with sadness for the devastating loss of my true friend Michael. He was an extraordinary friend, artist and contributor to the world. I join his family and his fans in celebrating his incredible life and mourning his untimely passing.

Thriller director John Landis: I was lucky enough to know and work with Michael Jackson in his prime. Michael was an extraordinary talent and a truly great international star. He had a troubled and complicated life and despite his gifts, remains a tragic figure. My wife Deborah and I will always have great affection for him.

Smokey Robinson: It’s so shocking. “Michael was a gregarious prankster, but so advanced for his age talent-wise. He was watching everybody and learning all the time. He was a typical young boy too. One of my fondest memories is of him riding the golf carts when Bobby Taylor, who brought the Jackson 5 to Motown, and I played golf. The world is mourning the loss of his talent, and people will miss his music. Michael Jackson was one of the most intense, dynamic talents to ever live. When I was in London recently, the whole buzz was about those 50 concerts. He was still Michael Jackson.

Usher: This loss has deeply saddened me, with a heavy heart I composed this statement. May God cover you Michael. We all lift your name up in prayer. I pray for the entire JACKSON family particularly Michael’s mother and all his fans that loved him so much. I would not be the artist, performer, and philanthropist I am today without the influence of Michael. I have great admiration and respect for Him and I’m so thankful I had the opportunity to meet and perform with such a great entertainer In so many ways he transcended culture. He broke barriers, he changed radio formats! With music, he made it possible for people like Oprah Winfrey and Barack Obama to impact the mainstream world. His legacy is unparalleled Michael Jackson will never be forgotten.var addthis_pub=”reserveresult”;