Leave a comment Posted by Reserve Result. on December 10, 2008

Danny DeVito stars Little Spirit: Christmas in New York, after a little boy named Leo moves to New York prior to Christmas, he learns through the help of a magical creature named “Little Spirt” that the city is not as overwhelming as it seems. The Macy presents 60 minutes, animated holiday film airs tonight on NBC@ 8pm.

Leave a comment Posted by Reserve Result. on August 19, 2008

I rarely watch NBC’s Today show, but I’m glued to Olympics coverages on NBC. As I was putting on my shoes and heading out this morning, I decided to see what’s going on with the Olympics, only to find laugh-out-loud Matt Lauer and Al Roker training to be male tandem rhythmic gymnasts and then performing their routine to Gary Wright’s Dream Weaver. Look out for Newsman Brian Williams cameo as well.

See the funny clip below – enjoy!

Leave a comment Posted by Reserve Result. on November 18, 2007 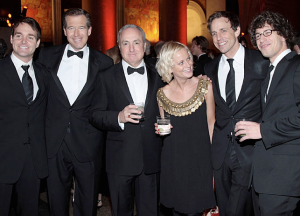