David Fincher ~ The Girl With The Dragon Tattoo

Leave a comment Posted by Reserve Result. on September 22, 2011

The Adventures of Tintin: The Secret of the Unicorn – 1st Look

Leave a comment Posted by Reserve Result. on November 10, 2008

Reserve Result would like to thank AFI Film Festival 2008 for our invitations & tickets to Director Edward Zwick’s Defiance Closing Night Gala, and a special thanks to Ryan Reiter, Gala Producer Chad Whidden, Susan Garbett, Randall Law and the volunteers for being so gracious and kind to us and all patrons.

Defiance “…is an epic tale of family, honor, vengeance and salvation in World War II begins in 1941. The Jews of Eastern Europe are being massacred by the thousands. Managing to escape certain death, three brothers take refuge in the dense surrounding woods they have known since childhood. There they begin their desperate battle against the Nazis. Daniel Craig, Liev Schreiber and Jamie Bell star as brothers who turn a primitive struggle to survive into something far more consequential—a way to avenge the deaths of their loved ones by saving thousands of others. At first it is all they can do to stay alive. But gradually, as whispers of their daring spreads, they begin to attract others—men and women, young and old—willing to risk everything for the sake of even a moment’s freedom. Tuvia (Craig) is a reluctant leader, and his decisions are challenged by his brother Zus (Schreiber), who worries that Tuvia’s idealistic plans will doom them all. Asael (Bell) is the youngest—caught between his brothers’ fierce rivalry. As a brutal winter descends, they work to create a community, and to keep faith alive when all humanity appears to be lost.”

Synopsis: Betrayed by Vesper, the woman he loved, 007 fights the urge to make his latest mission personal. Pursuing his determination to uncover the truth, James Bond and M interrogate Mr. White who reveals the organization which blackmailed Vesper is far more complex and dangerous than anyone had imagined. Forensic intelligence links an Mi6 traitor to a bank account in Haiti where a case of mistaken identity introduces Bond to the beautiful but feisty Camille, a woman who has her own vendetta. Camille leads Bond straight to Dominic Greene, a ruthless business man and major force within the mysterious organization. On a mission that leads him to Austria, Italy and South America, Bond discovers that Greene, conspiring to take total control of one of the world’s most important natural resources, is forging a deal with the exiled General Medrano. Using his associates in the organization, and manipulating his powerful contacts within the CIA and the British government, Greene promises to overthrow the existing regime in a Latin American country, giving the General control of the country in exchange for a seemingly barren piece of land. In a minefield of treachery, murder and deceit, Bond allies with old friends in a battle to uncover the truth. As he gets closer to finding the man responsible for the betrayal of Vesper, 007 must keep one step ahead of the CIA, the terrorists and even M, to unravel Greene’s sinister plan and stop his organization.

Director Marc Forster’s Quantum of Solace new trailer – 22nd James Bond film (B22) – will hit the net on Monday, June 30. The 1 minute 51 seconds trailer will debut on AOL.com (domestic) and MSN.com (international) Monday morning from Noon – 2 p.m. Easter Time (9:00am – 11:00am Pacific Time). It’ll be dubbed or subtitled in 13 languages. 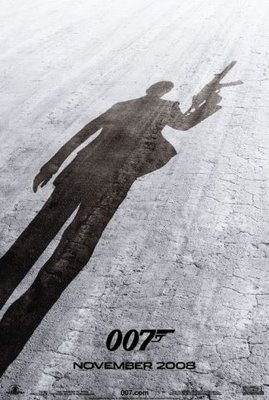 Leave a comment Posted by Reserve Result. on November 19, 2007

Kanye West, Bill Clinton and Daniel Craig grace the cover and pages of GQ magazine as the Men Of The Year.

Synopsis: Lyra Belacqua is an orphan who lives happily in Jordan College, Oxford, playing with local boys and terrorizing the professors. However, when Lyra overhears scholars discussing a plot against her uncle, Lord Asriel, centering around a mysterious substance called Dust, her curiosity is roused. Soon Lyra is in over her head as she uncovers a frightening plot and a whole new world of possibilities.