Synopsis: Alone among assassins, Jack [George Clooney] is a master craftsman. When a job in Sweden ends more harshly than expected for this American abroad, he vows to his contact Larry that his next assignment will be his last. Jack reports to the Italian countryside, where he holes up in a small town and relishes being away from death for a spell. The assignment, as specified by a Belgian woman – Mathilde – is in the offing as a weapon is constructed. Surprising himself, Jack seeks out the friendship of local priest Father Benedetto and pursues romance with local woman Clara. But by stepping out of the shadows, Jack may be tempting fate.

Leave a comment Posted by Reserve Result. on September 2, 2009

Fantastic Mr. Fox is based on Roald Dahl’s novel about a crafty fox finding himself and his family been targeted to death by the three dumb, plug-ugly farmers who’re tired of sharing their chickens with the critter.

Leave a comment Posted by Reserve Result. on August 27, 2009

The Overture Films clan released the first-look trailer of actor-morphed-Producer-slash-director Grant Heslov’s The Men Who Stare at Goats starring his friend and Smoke House partner George Clooney, Ewan McGregor, Kevin Spacey, Jeff Bridges, Rebecca Mader, Stephen Lang and Terry Serpico. When we were at 2008 Santa Film Festival covering their daily news, Heslov was shooting the film and New Mexico was a buzz about Clooney and upon watching the trailer the buzz was warranted.

The Men Who Stare at Goats hits theaters on Friday, November 6 and based on author Jon Ronson’s book of the same name. It tells the story of a secret unit within the US Army called the First Earth Battalion, whose paranormal military ideas mutated over the decades to influence interrogation techniques at Guantanamo Bay.

Twentieth Century Fox Animation and Fox Searchlight Pictures have release the 1st look trailer of Wes Anderson’s The Fantastic Mr. Fox – a stop-motion animated feature – which hits theaters on Friday, November 6. The Fantastic Mr. Fox is based on Roald Dahl’s novel about a crafty fox finding himself and his family been targeted to death by the three dumb, plug-ugly farmers who’re tired of sharing their chickens with the critter.

George Clooney continues fighting the good fight, to bring attention to the displaced people of Chad, Darfur in Africa and does a special coverage with NBC Today Show‘s Ann Curry. In this segment clip below, he injects humor about the toiletry and channels CBS 60 Minutes newsman Andy Rooney. George Clooney raises awareness for Not On Our Watch and Save Darfur, both organizations are humanitarian African charities.

Visit msnbc.com for Breaking News, World News, and News about the Economy

Director George Clooney and Julianna Marguiles reunited as their respective characters as Dr. Doug Ross and Nurse Carol Hathaway on last night’s ER. Nurse Hathaway cuddling with his now husband-Ross receives a call about the success of an operation in Chicago and then returns to holding each close while smiling and whispering to each other.

Leave a comment Posted by Reserve Result. on March 4, 2009

On the behalf of Not On Our Watch, a celebrity human rights group that uses their “celebrity capital” to draw attention to the world’s suffering peoples, Matt Damon visit Zimbabwe refugee camps in Musina, South Africa while shooting The Human Factor – a film directed by Clint Eastwood and starring Morgan Freeman – talked to Zimbabwean woman described been raped while pregnant during her journey to cross into South Africa from troubled Zimbabwe.

About 3,000,000 Zimbabweans have “fled economic collapse and dire humanitarian conditions at home“, and Damon told the Associated Press that he was “shocked and saddened” by the suffering of those talked to at the refugees camps. To read the full article about the remarkable strength of the Zimbabwean women, children and men, please visit USA Today.

The Human Factor is a film that takes a look at the life of Nelson Mandela after the fall of apartheid in South Africa during his first term as president when campaigned to host the 1995 Rugby World Cup event as an opportunity to unite his countrymen.

Leave a comment Posted by Reserve Result. on August 26, 2008

The 65th Venice Film Festival kicks offs on Wednesday, August 27 at 7 p.m. with the Opening Ceremony, and George Clooney, Brad Pitt and his sons – Maddox & Thien – arrive in Venice, Italy to support their opening ‘Coen Brothers’ film – Burn After Reading. 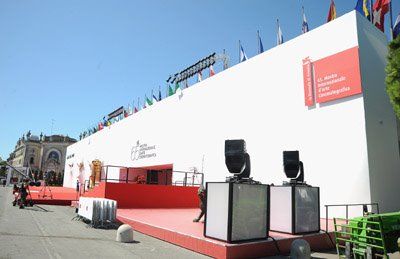 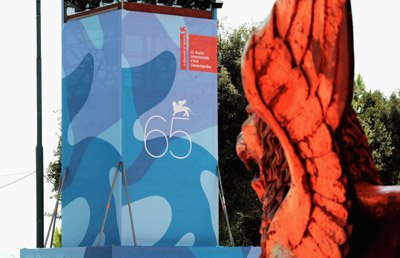 The festival ends on Saturday 6th of September 2008.

Shannyn Sossamon and George Clooney paired up on an European commercial for Martini drink, and gone are the days when Americans couldn’t view overseas celebrity spots. Enjoy!

Enjoy the preview for this black comedy –

Synopsis of Burn After Reading: CIA agent Osborne Cox(John Malkovich) decides to pen his memoirs and is fired from the agency. The disc containing the memoirs inadvertently gets left in a ladies locker room at a gym, where Linda (Frances McDormand) and co-worker Chad (Brad Pitt), hatch a plan to sell its contents to the highest bidder.

This flick hits theater nationwide on September 12th of 2008.