Sex and the City 2 – Movie Trailer

Sarah Jessica Parker [Carrie], Kim Cattrall [Samantha], Kristin Davis [Charlotte] and Cynthia Nixon [Miranda] are back in Sex and the City 2 with lots of cameos fused with comedy and drama. Enjoy the movie trailer.

Sex and the City 2 hits theaters on Friday, May 27.

Sex and the City 2: The Movie – Trailer

Leave a comment Posted by Reserve Result. on December 23, 2009

Sarah Jessica Parker, Cynthia Nixon, Kristin Davis and Kim Cattrall are back for the summer in the SATC sequel – Sex and the City 2: The Movie – and New Line has released the new trailer below –

Leave a comment Posted by Reserve Result. on February 18, 2009

Sarah Jessica Parker and Vogue Anna Wintour sat front row at designer Alexander Wang fashion week show in New York City. Ms. Parker confirmed to Access Hollywood host Billy Bush that Sex and The City sequel is been assembled by writer / executive producer Michael Patrick King and says “There’s a lot that we have to think about because times are very different. So these are nice challenges, these are good challenges. I’m glad they’re not mine, they’re really Michael Patrick’s, but we certainly have conversations about them.” 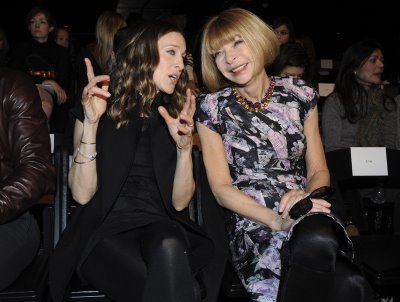 Leave a comment Posted by Reserve Result. on February 5, 2009

The lovely Sarah Jessica Parker graces the cover and pages of Harper’s Bazaar March 2009 issue and says the economy now is very scary. I know so many people who have lost jobs, are losing jobs, husbands who have lost jobs. I can’t imagine going shopping. And that her Sex and the City character Carrie Bradshaw would probably end up in a hospital. Perhaps she would go back to her ’80s stuff and start bringing it out again.

Here are excerpts from the Harper’s Bazaar interview:

On what she can’t live without: My son! My husband! Food! Oh, fashion? I don’t know. A good bra?

After wearing black to wed Matthew Broderick, what would she’d wear to renew her vows: I’d wear a beautiful, proper wedding dress, like I should have worn that day. James Wilkie’s teacher is getting married, and he said, Do you think she will be wearing black? I said, No! I can almost assure you. Then he said, Do you still regret it? and I said, Yes, I still regret it.

Her advice for surviving modern celebrity: Don’t surround yourself with bodyguards and SUVs, and return everything you are loaned in the shape in which you received it. Return jewelry, return bags, clean out the bags!

On not watching Gossip Girl: Are the characters sexually active? I hear it’s pretty sophisticated, the content. Is there any concern over the impression that it’s making on young women? I’m not asking in condemnation, but I’m just curious.

USA Today talked to Oscar winner Jennifer Hudson as the new addition to ‘Sex and the City’ movie.

Tell me about your self-titled album, which comes out in September. What are the key songs: Spotlight is a pop feel, kind of clubbish. It’s a hot track. Then we have Pocketbook, which is sassy. It reminds you of Louise, because she’s loving purses. Happy Place is one of my favorites. People who know me will know what songs I had a whole lot to do with, because they’re sassy.

Did you feel like the new kid on the block on the set: It’s a family that already lived together, and they added me. They’re fierce, and I get to be fierce and fabulous with them.

Sex and the City: the Movie – Video

Click here to watch more Sex and the city: the movie clips.

The actresses of Sex and the City: the Movie dominate cover and pages of Entertainment Weekly 63-pages, double issue.

On there’s more to the film than closets, orgasms, and cosmos: It can’t be just about wanton lust — that’s not the truth about these women anymore, Sarah Jessica Parker explains. The top of the movie is like a dollop of cream — delicious imagery and scant narrative. It just tells you what we’ve been doing, and then: boom. It’s a recovery operation. The movie goes to a very dark place that we’ve never done before.

Sex and the City: the Movie hits theaters nationwide on Friday, May 30th.

On Ms. Parker feeling there’s a lot at stake for her personally: I want it to do well, but the bigger story for me here is that I want the people who hold the purse strings to believe that there are female audiences, that it’s worth their money.

You can read the full Entertainment Weekly article at EW.com

Sarah Jessica Parker graces the cover and 18-pages of Vogue magazine, and you can watch Vogue’s behind-the-scene shoot with Annie Leibovitz and Chris Noth in New York City. 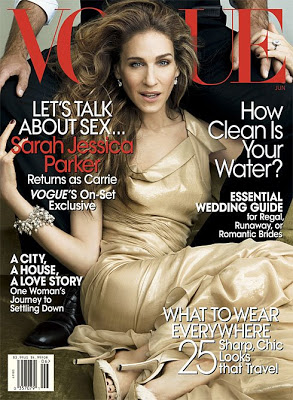 Sarah Jessica Parker dressed in Alexander McQueen and Phillip Treacy hat attend The Sex and the City: the movie premiere in London.

Sarah Jessica Parker addresses the lack of color women on her SATC: series and how they landed Oscar-winner Jennifer Hudson as Carrie Bradshaw’s assistant for SATC: the movie.

On casting academy award winner Jennifer Hudson in Sex and the City: The Movie: Michael Patrick King. I had wanted him to include an African-American [character on the show] for a long time, because I recognized that African-American women would legitimately say, “Why aren’t there enough women of color [on the show]?” And I would say, “I agree. It hasn’t really reflected New York.” And Michael was always [insisting} that you can’t do token [parts]; you can’t just throw someone in there because it’s necessary. You have to find something real or it’s even worse than not getting somebody. So he wrote this part, and he said he wanted Jennifer Hudson. And I was like, “Sure, get in line! Everyone wants Jennifer Hudson.” And then she came in and read, which I couldn’t believe. And she was lovely. She’s beautiful in person. She’s gorgeous. She’s probably six inches taller than me, easily. And she was so happy to be there and so enthusiastic and couldn’t believe it.